skip to main | skip to sidebar


That pretty much sums up last weekend!

Saturday was a beautiful day for a ride; Sunny and warm, light breeze.

I decided that I should go for a ride on Sunday………The weather went Kaput on Sunday! High winds out of the southwest, cold and rain. Charlie went with me, we decided to ride north.

About sixty miles into our ride up in the mountains of Northeastern Washington, in the pouring rain and cold, Charlie pulled in his clutch as he was approaching a stop sign, in the middle of nowhere mind you, and his bike went Kaput! Charlie made a phone call (at least he had phone service up there) and was able to get in touch with a good friend who had a trailer to give Charlie and his bike a ride home.

Once the bike was loaded on the trailer, I jumped on my bike and rode south into a miserable headwind, fighting the rain and cold. At least I had my heated gear to keep me comfortable. That is until my heated vest……………went Kaput! The variable heat controller gave up the ghost about 90 miles from home.

I arrived home sometime later that evening, gave the dog a hug and then slumped down onto the couch; I was utterly finished, unable to function, yep! I was Kaput!

I contacted the maker of my vest on Monday and they are replacing the malfunctioning part of my vest, no questions asked. Good deal.

Charlie’s bike is in little pieces right now on the floor of his garage; it has been decided that a rebuild is in order. We don’t know exactly what happened to the engine just yet but the rebuild kit is on the way; his KLR650 is going to come back to him as a KLR685.

Charlie was planning on doing this sometime in the future, just not exactly under these circumstances.

As I sit here typing this, I am trying to think of an appropriate antonym for the word Kaput. Once I figure that out, I am going to concentrate really hard on making that word a reality.

I am still here.

I was out lurking on some other blog-sites and I noticed that my last post on "Two Wheels" was 5 months ago.

5 months? Really? Time has flown by.

There have been a number of reasons why I haven't had a chance to post anything. The biggest reason has been workload.

In 2009, the construction based company that I work for, has suffered, along with everybody else and as a result has had to cut its workforce. Fortunately, my job was spared. Unfortunately, others weren't. With the cuts in staff, the few remaining individuals have had to pick up the workload that was left over when our staff was let go. Those of us who remained were also hit with almost a month of mandatory furloughs that each of us had to take. It's been challenging.............but at least I am still employed, for that, I am thankful though exhausted.

2010 appears to be turning around for my company. We are beginning to re-hire our staff and my boss has assured me that the furloughs have proven to be a disaster for the company and there are no plans to have anymore! Already I am feeling a reduction in my workload and an increase in my personal time. Hopefully this will free me up to do the things that I used to do to decompress, one of which is spending time with my blogging friends; I have missed spending time with you all here.

Then there was The Virus!

Just as I was beginning to get ready to start blogging about a month or so ago, my computer picked up a mother of a virus. With it, all of my photo's and journal entries are tied up in there. Charlie and I think that we can recover them, it'll just take a little time.

Unfortunately, all of the photo's that I took during our summer trip last year, the trip that I was just beginning to share with all of you in "Journey of a thousand miles" are locked up in my hard drive. Bummer. I plan to continue to share our ride into the Montana back-country although, for the time being, without pictures.

Charlie, in the meantime, took pity on me and has lent me his laptop so that I can at least stay online.

I am still here in one piece, and I will be back. I am working on my next post of "Journey of a thousand miles" and will publish it as soon as it is finished.

The first leg (Journey of a thousand miles)

This old road is graceful and familiar.
I travel it often.
During this time of the week and at this hour of the morning, the traffic is light. There are seldom any distractions.

I ride north on the old Route 195 and pass intersecting dirt roads named after the farmers who tamed the land; Babb road, East Whitman, South Hardesty, then Whittier, Davis and Bradshaw.

The green expanse of the Palouse in June stretches out from horizon to horizon, tumbling across the landscape like waves on the ocean; unencumbered by the harsh constructs of man. 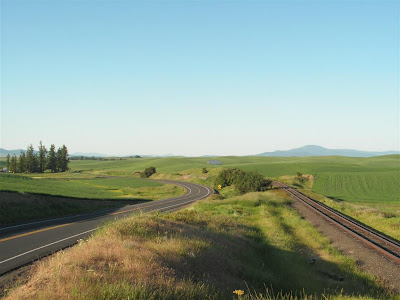 There are no grid-like street patterns, no buildings or sky-scrapers tearing up the rhythm of the hills like a dissonant chord.

The hand of man has been here though, laid down by his plow. A soft concerto, easy on the soul, things are tended here, not developed; Pianissimo. 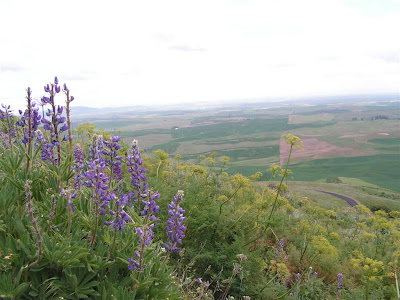 As I ride, I take in the scent of turned earth and wildflowers in bloom.
The wind is cool and soft.
My anxieties relax.

This is the beginning of my Vacation.

Stephen
Journal entries about the vessels that I have sailed and the interesting people that I have had the privilege to meet in my travels.

When we seek for connection, we restore the world to wholeness. Our seemingly separate lives become meaningful as we discover how truly necessary we are to each other.